The Agua Caliente Solar Energy Zone (SEZ) is located in southwestern Arizona, in the Lower Colorado Subdivision of Sonoran Desert scrub vegetation community. The SEZ is located on BLM-administered land within the Yuma Field Office.

The Agua Caliente SEZ was established in January 2013 through the Record of Decision (ROD) for the Arizona Restoration Design Energy Project (RDEP), following the requirements of the BLM's Solar Energy Program presented in the Solar PEIS ROD. The 2,560 acre SEZ is located near Dateland in western Arizona. The Draft and Final EIS for the RDEP project included detailed analyses and maps for the Agua Caliente SEZ. These analyses supported establishment of this SEZ.

As of June 2014, BLM Arizona had not received expressions of interest for new projects in the SEZ. As of November 2018, there were no pending applications in Arizona.

A 290-MW PV facility located on private lands within the SEZ boundaries was completed in 2014. The facility is owned by NRG Energy. The energy from the project provides enough electricity to power 100,000 homes and displace 220,000 tons of CO2 annually; electricity is being sold to Pacific Gas and Electric Company.

The RDEP Draft EIS identified about 20,600 acres (83.37 km2) for analysis for possible inclusion in the Agua Caliente SEZ. The SEZ boundaries were revised for the Final EIS to include buffers around the major washes; remove the northern portion of the larger SEZ footprint to maintain the area for potential tortoise migration between the Palomas Mountains and Baragan Mountain; and to avoid most known archaeological sites and lands with wilderness characteristics. The total revised area of the SEZ was 2,560 acres (10.32 km2). The RDEP ROD established the smaller SEZ, eliminating sensitive resources and lands.

The Agua Caliente SEZ is located in the eastern portion of Yuma County about 65 miles (104.61 km) northeast of the city of Yuma, and 60 miles (96.56 km) southwest of Buckeye. The SEZ is bordered by BLM lands to the north and west, and state and private lands to the east and south. The Agua Caliente SEZ is located within the Palomas Plain, which is bounded by the Palomas Mountains to the west and Baragan Mountain to the north. Dateland is the largest community in the planning area and is located approximately 12 miles (19.21 km) south of the SEZ along interstate 8. In 2000, the population of the Dateland area was 852.

Agua Caliente SEZ
(Non-development areas within the SEZ were not identified in the RDEP EIS.) 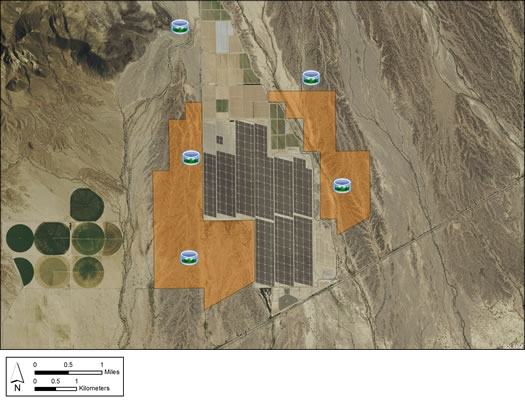 The primary land cover habitat type in the SEZ is Sonora-Mojave Creosotebush-White Bursage Desert Scrub. Three ephemeral washes in the SEZ support riparian habitat, which may serve as wildlife corridors for species such as mule deer and mountain lion. This area is part of the largest unfragmented habitat remaining in southwest Arizona for bighorn sheep and mule deer. There is a high potential for previously unidentified historic military-related cultural resources to be located in the SEZ due to the U.S. Army's presence in the area during World War II.

The Agua Caliente SEZ is located in an area that is sparsely populated with limited economic development opportunities. The area surrounding the SEZ contains agricultural lands on the east and south sides, and undeveloped desert to the north and west.

Numerous transportation routes traverse the SEZ, most heading north-south and crossing or originating/terminating on private and state land. These routes receive heavy use during hunting season.

Yuma County has some of the highest levels of sunlight (solar insolation) in the U.S., and the county has already attracted significant interest in the development of solar energy.

A 500-kV east-west transmission line is located approximately 0.5-mile south of the SEZ.