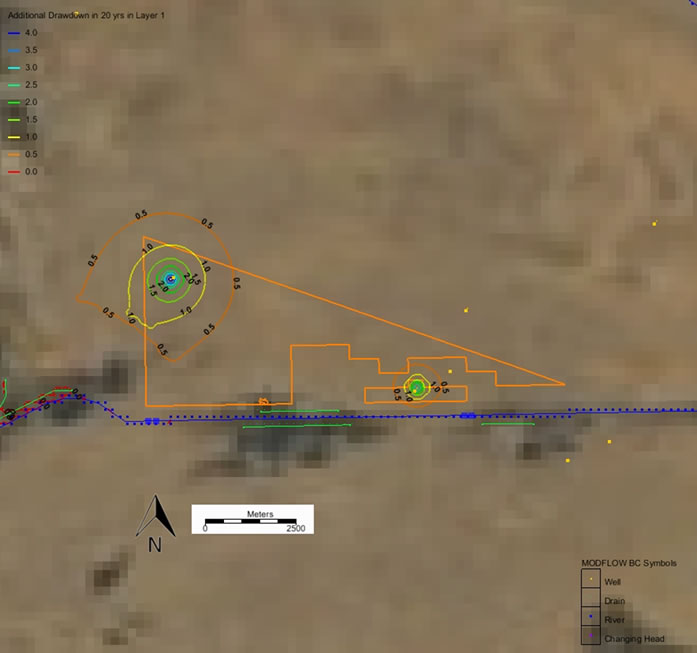 Additional drawdown in meters in the surficial model layer due to high-demand SEZ pumping after 20 years.

The Imperial East SEZ model is a model developed using public-domain geologic, hydrogeologic, and well pumping information and relying on the U.S. Geological Survey's MODFLOW 2000 code. It is a modification of the non-calibrated Tompson et al. (2008) model of the Imperial and Mexicali Valleys. Pre- and post-processing was performed using Groundwater Modeling System (GMS) version 9. In the first stage of the modeling, calibration of hydraulic conductivity and recharge was performed relying on pre-development, pre-canal steady-state water levels. Next, transient modeling was performed to calibrate water level changes due to municipal and agricultural water usage and the effects of irrigation canals. Finally, current pumping continued for 20 years into the future and included SEZ pumping to evaluate the effect of SEZ water requirements on groundwater drawdown.

The Imperial East Model report has further information regarding its development and results.

A Groundwater Model to Assess Water Resource Impacts at the Imperial East Solar Energy Zone (9.5 MB) (This report was released on 12/20/2013, but was updated on 1/10/2014 to include a title page with author names)

The Imperial East Model files are contained in several .zip files. Please see model report (Section 5.4) for a description of the model files. Please Note: These files are large and may involve long download times.

Note: Modeling was performed using GMS version 9.0 (64-bit) with a build date of March 25, 2013. The files are packaged in several .zip files. When unzipped, they may be useable by older or newer versions of GMS or by other commercial graphical user interfaces; however, functionality cannot be guaranteed.

Alterations to the Imperial East Model could be made with the incorporation of new data regarding the hydrogeological framework and aquifer parameter values. As projects are planned, constructed, and begin operations, additional groundwater pumping scenarios can be analyzed and new data on head observations in monitoring wells can be used to refine the model.