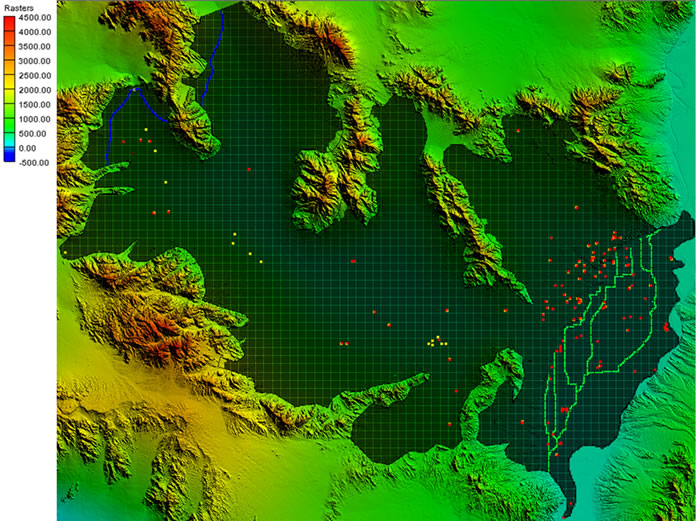 Ground surface elevations (feet) and layout of numerical model grid of the Riverside East Model. Present-day wells are in yellow, observation points are in red, and drains are in green. The Colorado River is represented as a series of constant-head cells on the eastern edge of the model and the Colorado River Aqueduct is represented by river conductance cells (in blue) near the northwestern edges of the model.

The Riverside East model considered three groundwater pumping scenarios (low, medium, and high) based on full build-out assumptions of the SEZ and was constructed using available hydrogeologic data and existing models for the basin. The U.S. Geological Survey’s MODFLOW 2000 code was used to construct a numerical (finite-difference) model, and pre- and post-processing was performed using Groundwater Modeling System (GMS) version 8.3. Calibration of hydraulic conductivity and recharge was performed, relying on pre-1942 steady-state water levels and transient water levels resulting from mining, agricultural and municipal pumping through 2010. A final simulation assessed 20 years of groundwater pumping within the Riverside East SEZ to evaluate its effect on groundwater drawdown relative to existing groundwater pumping for various uses in the basin.

The Riverside East Model report has further information regarding its development and results.

The Riverside East Model files are contained in several .zip files. Please see the “ReadMe.txt” file for a description of the model files.

Note: Modeling was performed using GMS version 8.3.4.16592 (64-bit) with a build date of August 24, 2012. The files are packaged in several zip files. When unzipped, they may be useable by older or newer versions of GMS or by other commercial graphical user interfaces; however, functionality cannot be guaranteed.

Alterations to the Riverside East Model could be made with the incorporation of new data regarding the hydrogeological framework and aquifer parameter values. As projects are planned, constructed, and begin operations additional groundwater pumping scenarios can be analyzed and new data on head observations in monitoring wells can be used to refine the model.