The Milford Flats South Solar Energy Zone (SEZ) is located in Utah in the Escalante Desert. The SEZ is located on BLM-administered land within the Cedar City Field Office.

The BLM Cedar City Field Office released an Environmental Assessment (EA) on April 20, 2018, to disclose and analyze the environmental consequences of competitively leasing four parcels of public land within the Milford Flats South SEZ for solar energy development. The proposed action was to lease four parcels of public lands within the SEZ for development of commercial scale (>20 megawatts MW) solar energy production, under the BLM's competitive leasing regulations for solar and wind. The four parcels of public lands to be offered competitively comprise approximately 5,564 acres. In July 2018, the BLM issued the Record of Decision for the project, adopting the proposed action outlined in the EA. These documents and additional project details are available on the project website. As of September 2019, no competitive auction of parcels or solar development has occurred within the SEZ.

The Milford Flats South SEZ has a total area of 6,480 acres (26 km2). In the Supplement to the Draft Solar PEIS, 228 acres (0.9 km2) composing the Minersville Canal were identified as a non-development area, leaving the SEZ with a potentially developable area of 6,252 acres (25.3 km2). No additional changes to the SEZ developable area were made in the Final Solar PEIS.

The Milford Flats South SEZ is located in Beaver County in rural southwestern Utah. The SEZ is located in the northeastern section of the Escalante Desert, bounded by Mineral Mountains to the northeast, Black Mountains to the south and southeast, Shauntie Hills to the northwest, and Wah Wah Mountains to the west. In 2008, the county population was 7,265, while adjacent Iron County to the south had a population of 45,833. The largest nearby town is Cedar City about 30 mi (48 km) south-southeast. Several small towns are located closer to the SEZ. 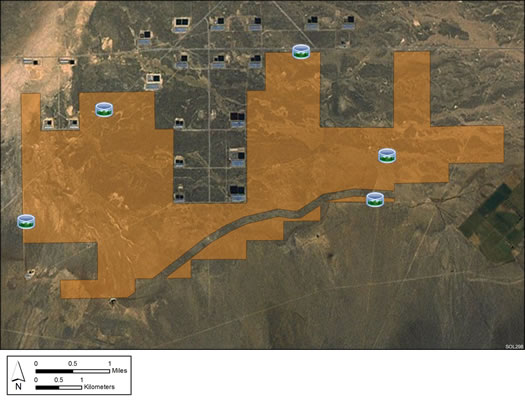 Land within the Milford Flats South SEZ is undeveloped scrubland characteristic of a high-elevation, semiarid basin. Vegetation consists primarily of low shrubs with areas of bare soil and gravel.

A number of unpaved roads cross the SEZ. The land within the SEZ contains livestock ponds (typically dry), cattle trails, and wire fences. No electric transmission lines are located within the SEZ. Part of the SEZ is authorized by the BLM for grazing. The SEZ may be used by local residents for general outdoor recreation, including backcountry driving and off-highway vehicle use, recreational shooting, and small and big game hunting.

Numerous large buildings that are part of a commercial confined hog-rearing operation are located on private land adjacent to the northern border of the SEZ. There are irrigated farms to the east of the area.

The nearest major road to the Milford Flats South SEZ is State Route 21/130, about 5 mi (8 km) east in Minersville. A smaller spur of State Route 129 is about 3 mi (5 km) northwest of the SEZ. Access to the Milford Flats South SEZ is by county and local roads. The nearest alternating current transmission line is a 345-kV line that runs north to south about 19 mi (31 km) southeast of the eastern boundary of the SEZ.